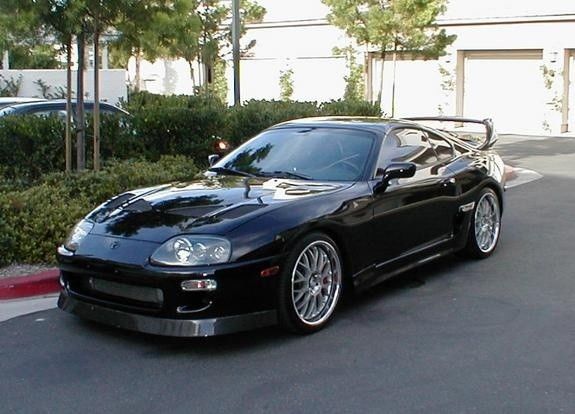 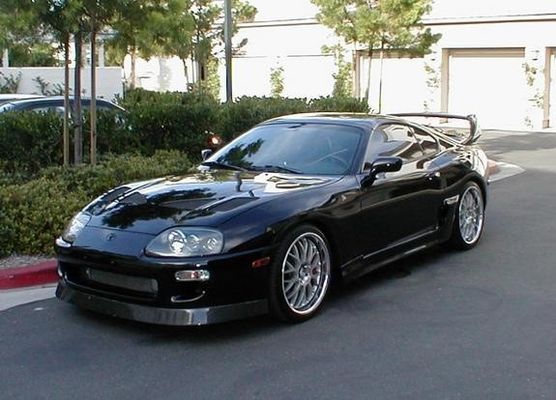 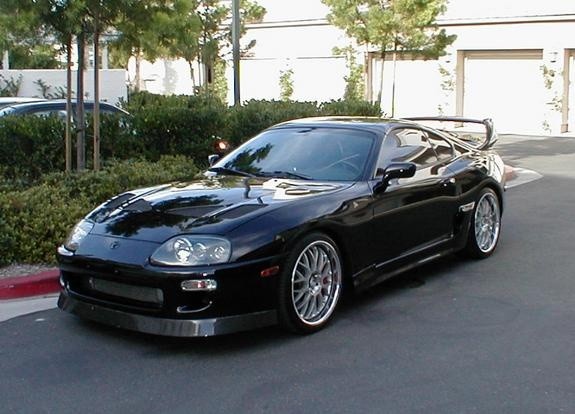 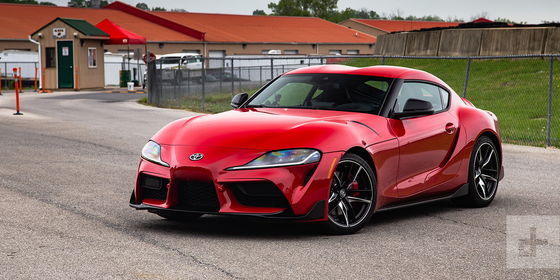 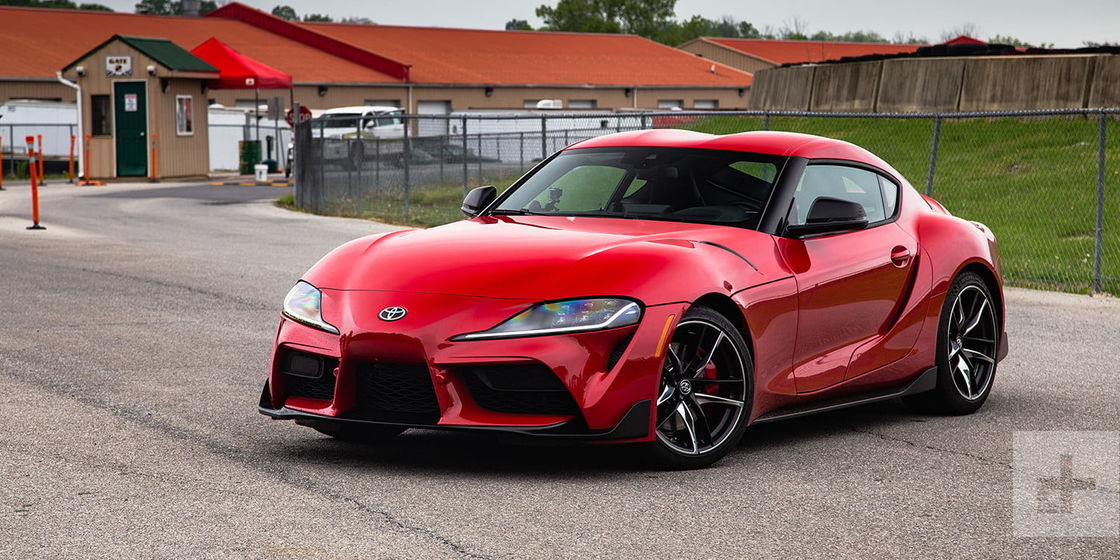 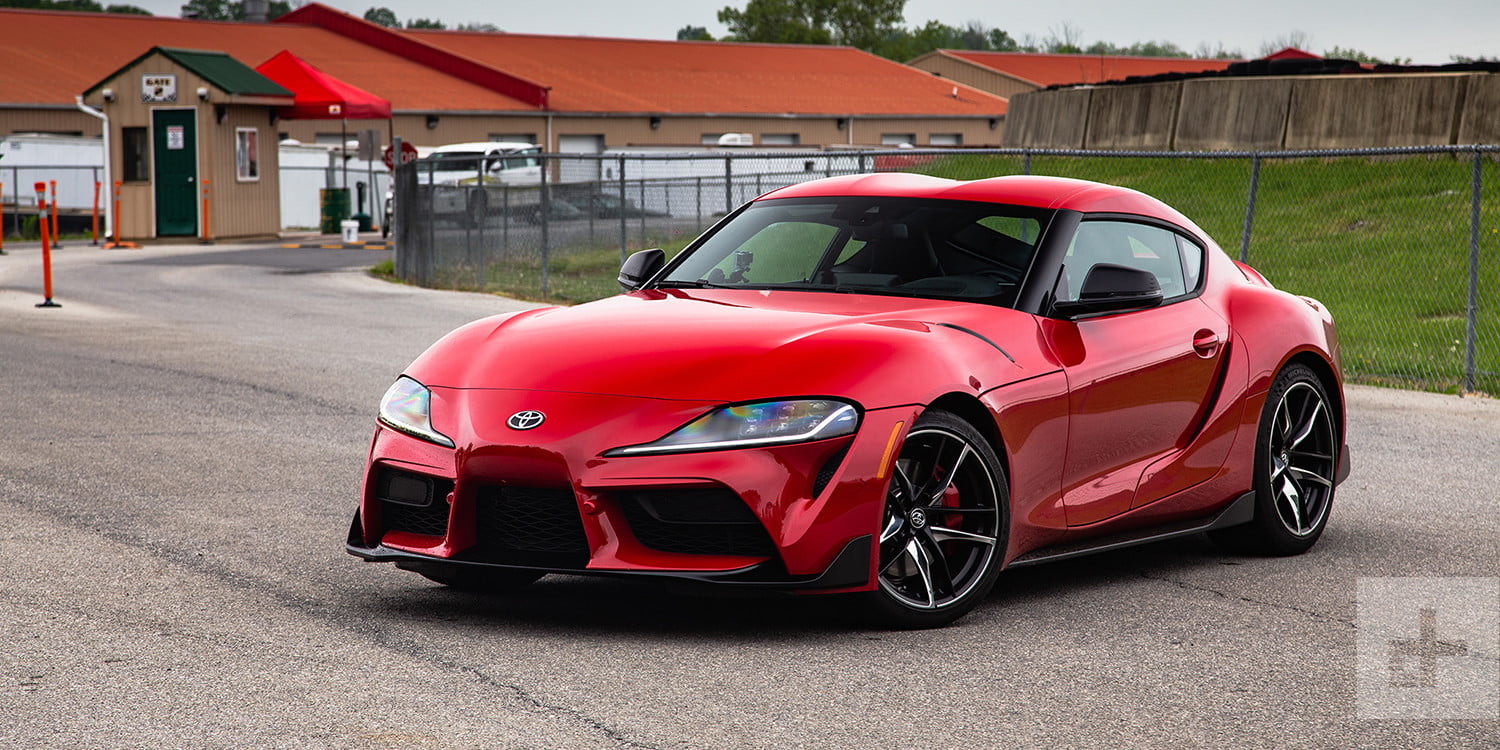 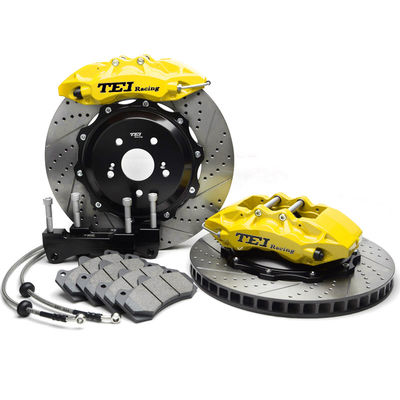 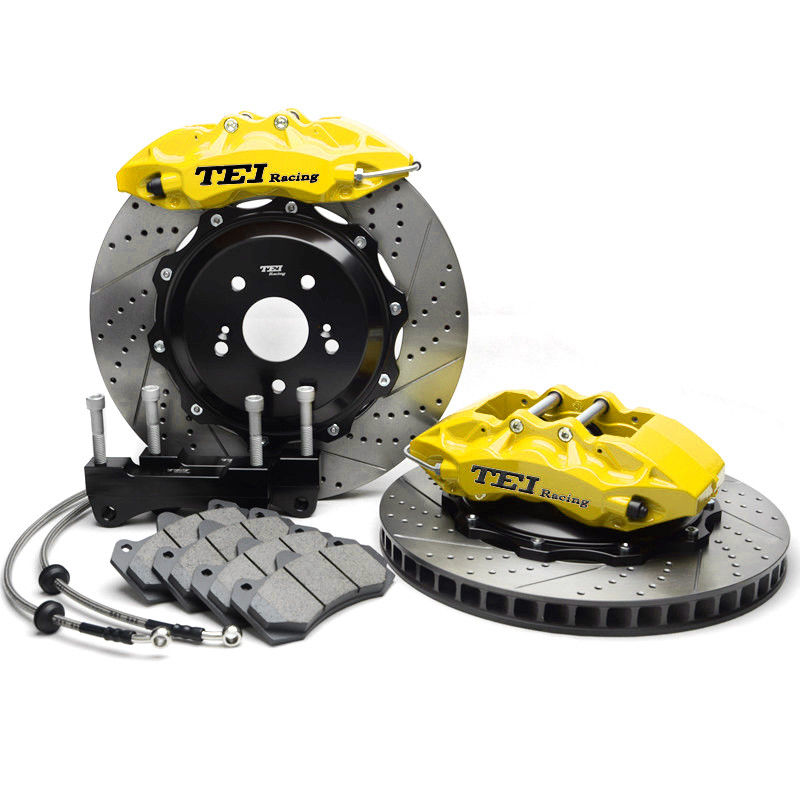 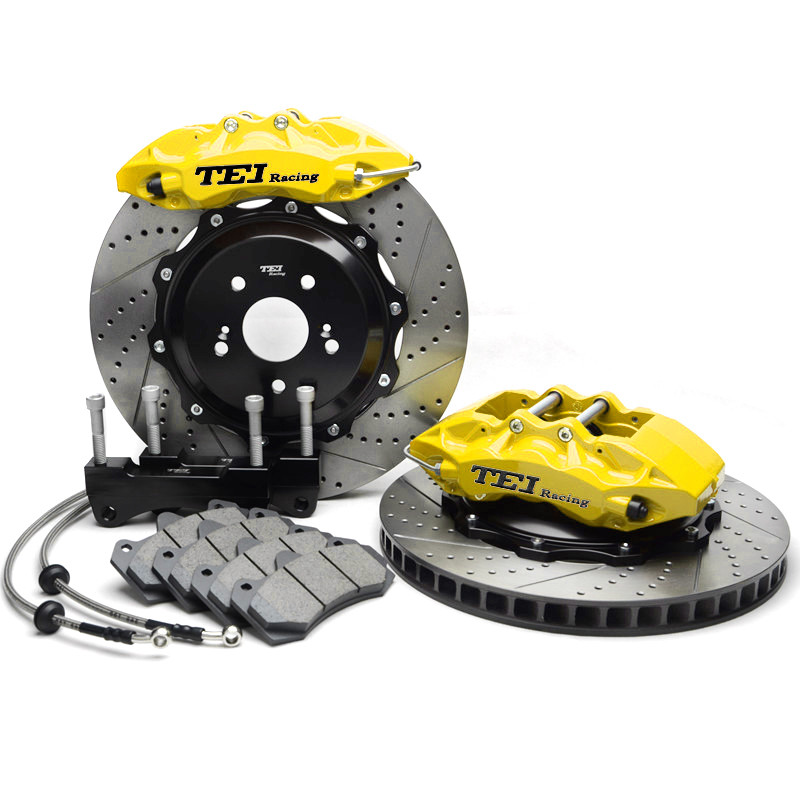 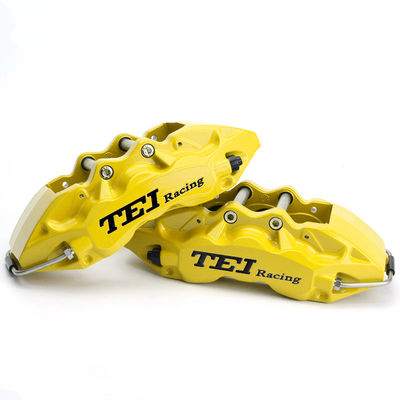 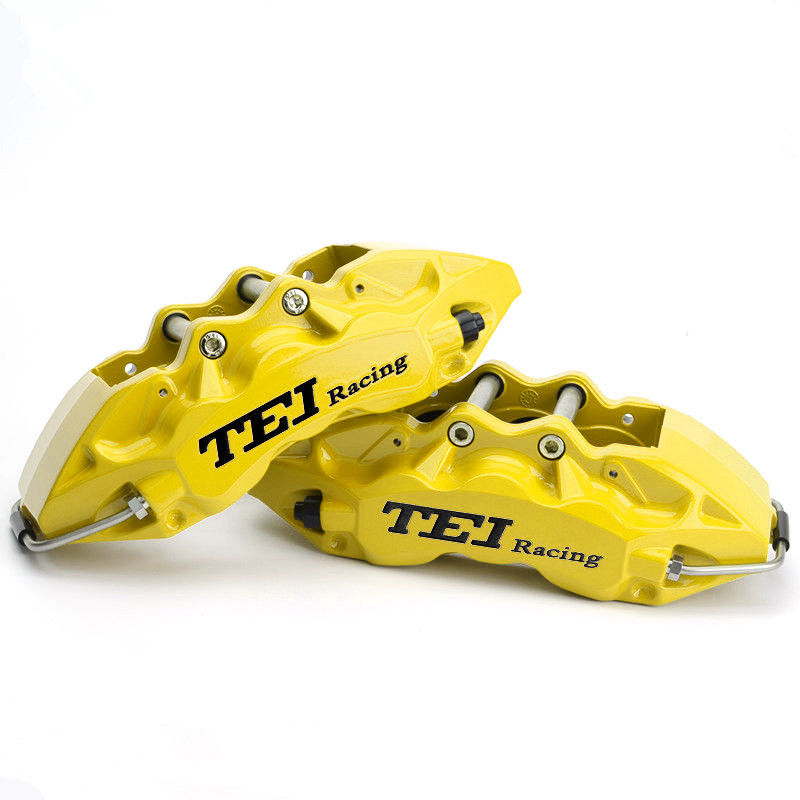 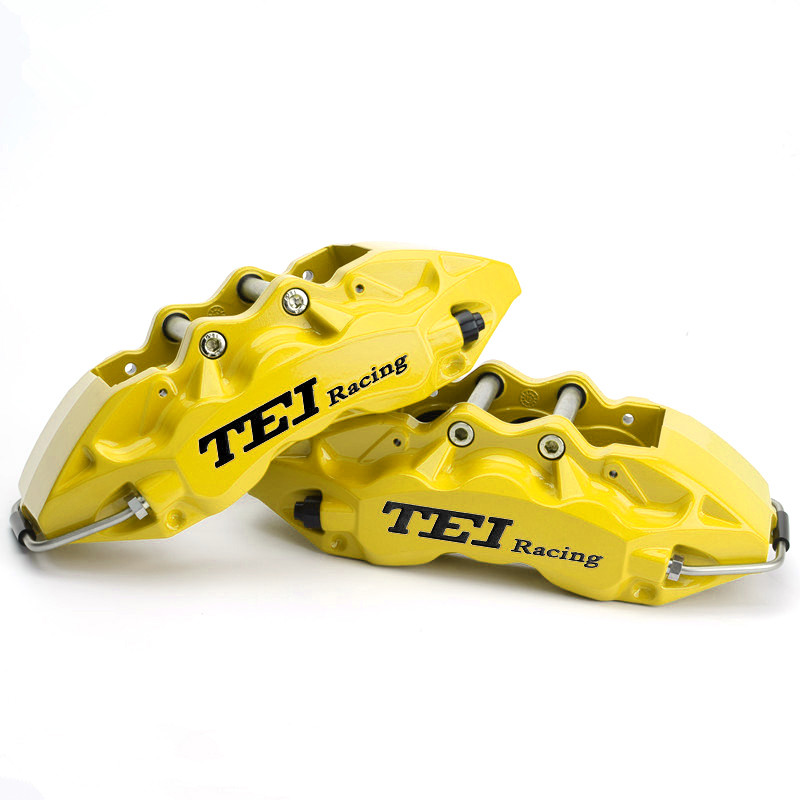 What's in the Box

Brake Pads (one set, for both calipers)

(We advise drilled for street and slotted only for track and race applications)
Curved vanes ventilation for optimal cooling.
Full-floating rotors use floating hardware with anti-rattle system (removable and rebuildable).
It provides a lower tendency to warp, less drag and wear as the rotor ring centers itself with the pads.
Available for 330mm rotors and bigger only.
The semi-floating rotor uses standard bolts instead and the rotor is fixed on the hat.
Custom rotor hat anodized color

The number of pots of the calipers will also play a role in term of pressure applied on the pads to make the contact as good as possible on the rotors. In order to fit the caliper on your original chassis, TEI Racing provides caliper brackets to position the calipers with your new braking system, making the perfect set up for your car brakes system.

Go fast and stop faster. TEI Racing Big Brake Kits provide you with serious braking power when you need it most. TEI Racing brake kits are offered for both the front and rear brakes with rotor sizes ranging from 285mm-405mm drilled or slotted or drilled and slotted, 2-6 piston Forged Monoblock aluminum caliper options, and custom colors. Stainless steel brake lines, brake pads, and all hardware are included for a direct bolt-on installation where no modifications are required.

The Toyota Supra  is a sports car and grand tourer manufactured by Toyota Motor Corporation beginning in 1978. The initial four generations of the Supra were produced from 1978 to 2002. The fifth generation has been produced since March 2019 and went on sale in May 2019.[3] The styling of the original Supra was derived from the Toyota Celica, but it was both longer and wider.[4] Starting in mid-1986, the A70 Supra became a separate model from the Celica. In turn, Toyota also stopped using the prefix Celica and named the car Supra.[5] Owing to the similarity and past of the Celica's name, it is frequently mistaken for the Supra, and vice versa. The first, second and third generations of the Supra were assembled at the Tahara plant in Tahara, Aichi, while the fourth generation was assembled at the Motomachi plant in Toyota City. The fifth generation of the Supra is assembled alongside the G29 BMW Z4 in Graz, Austria by Magna Steyr.

The Supra also traces much of its roots back to the 2000GT owing to an inline-6 layout. The first three generations were offered with a direct descendant to the Crown's and 2000GT's M engine. Interior aspects were also similar, as was the chassis code "A".

Along with this name, Toyota also included its own logo for the Supra. It was derived from the original Celica logo, being blue instead of orange. This logo was used until January 1986, when the A70 Supra was introduced. The new logo was similar in size, with orange writing on a red background, but without the dragon design. That logo, in turn, was on Supras until 1991 when Toyota switched to its current oval company logo. (The dragon logo was a Celica logo regardless of what colour it was. It appeared on the first two generations of the Supra because they were officially Toyota Celicas. The dragon logo was used for the Celica line until it too was discontinued.

In January 2019, the fifth generation of the Supra, which was co-developed with the G29 Z4, was introduced.